Supposedly the page on Fox Nation soon after the Obama "gay marriage" announcement. The page doesn't say this now (it just says that he "flip-flopped" on his position and SUPPORTS gay marriage, with nothing in there about declaring "war on marriage". Assuming that this is an accurate representation of what the page looked like at first (I took it from Takei's FB page), they changed it pretty quickly.

Ultimately it will come down to whether it's permissible for America to be a country in which affectional preference is determined to be a valid state or condition for legal civil marriage between two consenting adults and allowed in some places, but not in others. Just as "separate but equal" schools and the prohibition of interracial marriage were found to be unconstitutional, barring marriage of same sex couples, based on local law and custom, will also be overturned, at some point. 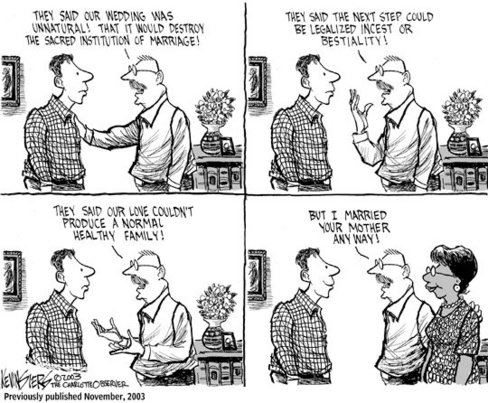