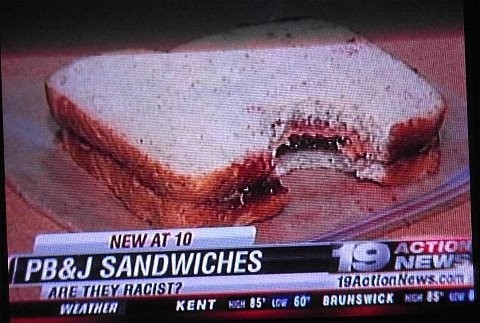 When I saw this, I thought it had to be some kind of 'shopped straw-man riff on the contortions some people go through to see racism in everything. But incredibly, it's not. Only in Portland!

Only the Banking Cartel's candidates are allowed to participate. The media is complicit in making sure no 3rd party candidates can join the debates. The Green Party and I don't have much in common at all, but if you're going to call yourself a Democracy (or Republic or Representative Republic, etc.) then have the decency to allow some variety of viewpoints into these sham debates.

It's funny because not only are they not allowed to participate in the debate, but they actually get arrested for sitting outside.

I don't completely agree with this; he's not acknowledging the influence of money on politics, but then, he's not really talking about that specifically, so...

Now, remember. When he did this in the first debate, it was manly and commanding. Then when Biden did it, it was crochety and drunk. Which is it now? Let's watch...

But just admit it.