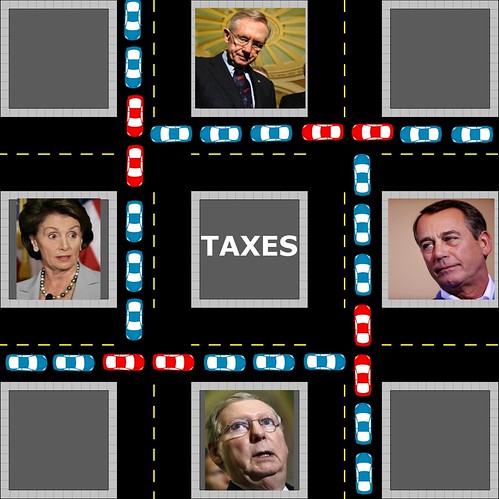 I can't remember ever seeing this here... I hope it's not a repeat (if it is, feel free to remove.)

Language is NSFW, but there are no offensive images at all. VOTE TODAY. There's more to November 6th, 2012 than simply a vote for the lesser evil. Educate yourself and educate others: local elections always matter and depending on which state you live in, so do national elections.

There are too many important community initiatives on the line to sit this one out It takes only a few good hours of research to get a fair idea of where you stand on your local propositions. For detailed descriptions of your local ballot measures and to find where your designated polling place is, visit TheBallot.Org. To find when your local polling station closes, visit Ballotpedia's State Poll Opening & Closing Times.

Regarding this year's presidential election, if you live in Colorado, Florida, Iowa, New Hampshire, Ohio, Virginia, Wisconsin, Arizona, or North Carolina, please remember there are indeed differences between Barack Obama and Mitt Romney. Please remember these differences weigh heavily upon women, minorities, and the poor, and please do consider the following:

A Campaign Ad for the Most Electable Candidate Ever -- powered by Cracked.com

But Obama will still be considered the pro-whistle-blower, pro-gay candidate: 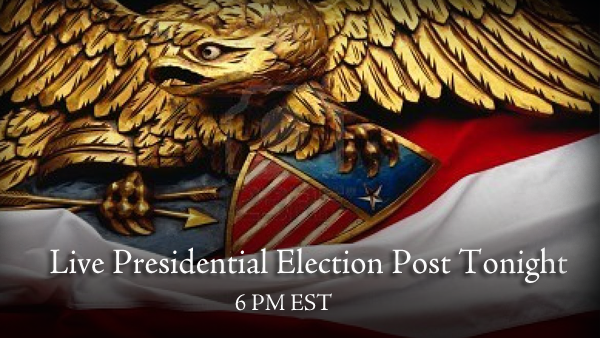 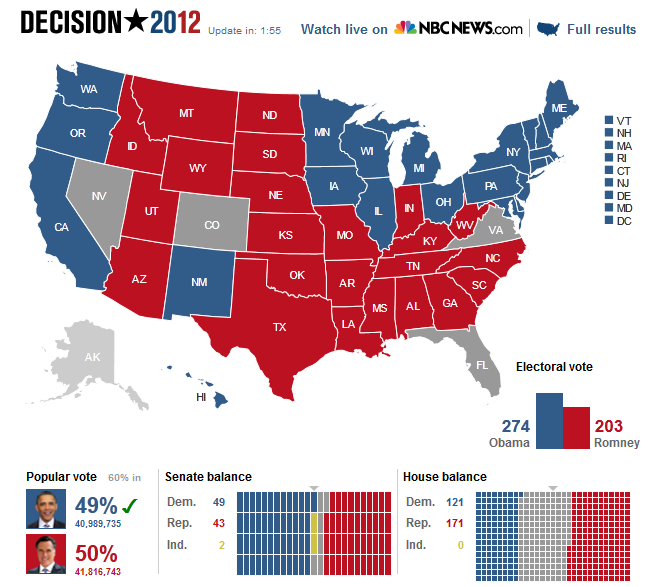 [If you not are sure about voting requirements in your state]

Be sure to vote! If you aren't sure what the legal requirements are to vote, or when the polls close,you can use this chart below. California polls will not close until 12 midnight on the East coast. 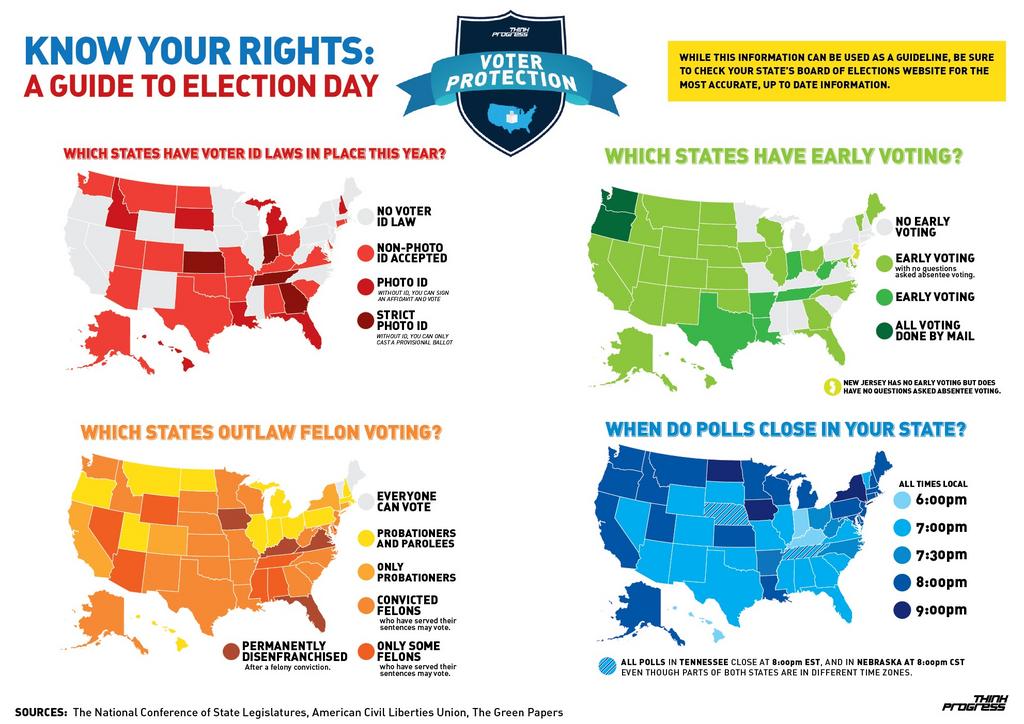 [Where to watch on line]

Here is your ultimate guide to watching the elections online below:


[Some interesting races to watch]

1. California and the death penalty. Proposition 34 would end the state's costly and inefficient experiment with capital punishment and transform all existing death penalties (725 in all) into life sentences without the possibility of parole.

4. Sheriff Joe Arpaio. The most infamous lawman in America -- and longstanding sheriff of Maricopa County, Arizona -- is heading toward yet another reelection victory. This despite a series of recent political scandals, costly litigation and allegations of fiscal mismanagement.

5. Judiciary. In four states closely aligned with Tea Party sentiment -- Arizona, Missouri, New Hampshire, and Florida-- conservative activists seek through ballot measures to limit judicial authority and independence through a series of partisan initiatives. The most blatant of these efforts is in Florida, where Americans for Prosperity, the Koch brothers-sponsored group, is seeking to remove three justices of the Florida Supreme Court. Millions have been spent on that race alone. Follow William Raftery's Gavel To Gavel blog on election night if you want the play-by-play. Here is his list of all judiciary-related amendments.

6. Alabama segregation. For the second time in eight years, voters in Alabama will have an opportunity to delete from their state constitution an explicit reference to racial segregation in public schools. The language currently on the books, a vestige of the state's dubious history of interposition, states:

It seems simple. But it's not. Many Democrats and school administrators believe the initiative would make matters worse. And speaking of which, Alabama voters will get a chance again on Tuesday to choose or reject for the judiciary Roy Moore, the infamous former state supreme court justice who once defied a federal court order forcing him to remove the Ten Commandments monument he had ordered built at the state's supreme court.

7. Abortion. In Florida, voters will confront Amendment 6, a measure that seeks to limit interpretation of the privacy rights contained in the state's constitution. In Montana, voters face LR-120, which involves parental-notification rules. In Oklahoma, a "personhood" measure that would have criminalized abortion was rejected as unconstitutional by the state's supreme court before it could make it onto the ballot. In case you were wondering, following a campaign where abortion and reproductive rights were issues, this isn't much different than 2010, when there were also three similiar measures (in Alaska, Colorado, and Missouri).

8. Health Care. Silly you, you thought the Supreme Court's decision in June to uphold the Affordable Care Act meant the end of legal challenges to the federal health care law. Wrong. New litigation has been filed. And voters in five states -- Alabama, Florida, Missouri, Montana and Wyoming -- will have the opportunity on Tuesday to weigh in with their views of the obligations contained in the Care Act. The gist of each of these measures is made clear in the simple language of Wyoming's proposed Amendment A:

The adoption of this amendment will provide that the right to make health care decisions is reserved to the citizens of the state of Wyoming. It permits any person to pay and any health care provider to receive direct payment for services

9. Three-strikes. Back to California for Proposition 36, which would reduce the scope of the state's notorious three-strikes law in an effort to clear overcrowded prisons there of more non-violent offenders. Like Proposition 34, the popularity of this initiative is owed perhaps as much to the budget savings the state would see from it as it is from the fact that the existing "three-strikes" law has resulted in terrible injustice to some Californians. If it passes -- and it was up in the polls the last time I checked -- it will be the clearest signal yet that states are serious about adjusting their views of the harsh costs of our prison society.

10. Death with dignity. Voters in Massachusetts face Question 2, which upon approval would mean a new state law "allowing a physician licensed in Massachusetts to prescribe medication, at the request of a terminally-ill patient meeting certain conditions, to end that person's life." The measure has been consistently in front in polling although its margin has slipped in the past few weeks. It's an important moment for supporters of a "right to die." It's been long enough for them to have comforting research on how Oregon's landmark law has worked. But they've struggled to translate that information into legislative success.

[AN EXCELLENT VIDEO PRIMER on the Electoral College]

Many thanks to Mr.

When Republicans Were Blue and Democrats Were Red

We take the visual maps used all over the Internet and TV for granted. But that wasn't always the case. Prior to 1976, it was a pretty boring visual experience. For the Bicentennial election, NBC News anchor John Chancellor developed the idea for a super sized map that would change colors as a state was declared for one candidate. But at that time, Blue was used for Republicans, and red was used for Democratic candidates. Why? Mr. Chancellor and the director of election coverage at NBC Roy Wetzel, decided to use the British color system: “Without giving it a second thought, we said blue for conservatives, because that’s what the parliamentary system in London is, red for the more liberal party. And that settled it. We just did it,” said Wetzel, now retired.

I want Nate Silver to walk out on a stage somewhere, stare at the audience, not say a word, drop the mic, and Gangnam Style off the stage.

Nate Silver is going to get so laid tonight on World of Warcraft.