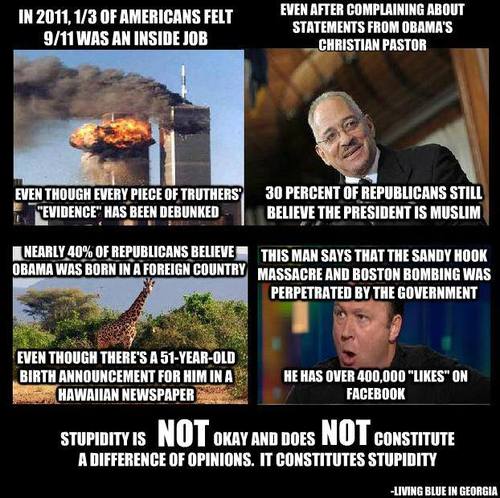 Alex Jones on the possible government involvement:
Jones... explained that "natural tornadoes" do exist; and he's not sure if a government "weather weapon" was involved in the Oklahoma disaster, Jones warned nonetheless that the government "can create and steer groups of tornadoes." According to Jones, this possibility hinges on whether people spotted helicopters and small aircraft "in and around the clouds, spraying and doing things." He added, "if you saw that, you better bet your bottom dollar they did this, but who knows if they did. You know, that's the thing, we don't know."

Bonus Fun: (this has to be satire, right?)
1.Prior to 3pm there, millitary [sic] and police went door to door in the area that is now completely demolished. They told all residence to leave the area and head north. 2. On there way out they saw multiple bulldozers and wrecking ball like machines moving into their neighborhoods. 6. One of my friends heard a self-proclaimed zionist talking to a shapeshifting white guy. They said that all the earthquake in oklohoma [sic] lately are a result of massive underground contruction [sic]. they were talking about how the Jewish race wishes to expand rapidly and that they are building massive Jewish settlements and Palestinian slave labor camps under Oklohoma [sic]…the reason… supposedly ak-la ham aer, which sound like oklohoma [sic], means “Jews are the best, screw the rest” in hebrew.