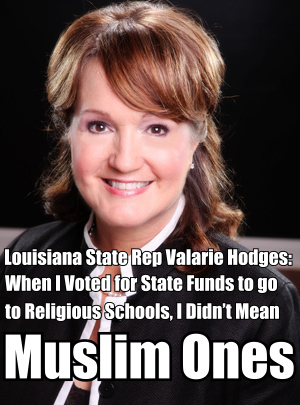 Rep. Valarie Hodges, R-Watson, says she had no idea that Gov. Bobby Jindal’s overhaul of the state’s educational system might mean taxpayer support of Muslim schools. “I actually support funding for teaching the fundamentals of America’s Founding Fathers’ religion, which is Christianity, in public schools or private schools,” the District 64 Representative said Monday. “Unfortunately it will not be limited to the Founders’ religion,” Hodges said. “We need to insure that it does not open the door to fund radical Islam schools. There are a thousand Muslim schools that have sprung up recently. I do not support using public funds for teaching Islam anywhere here in Louisiana.” 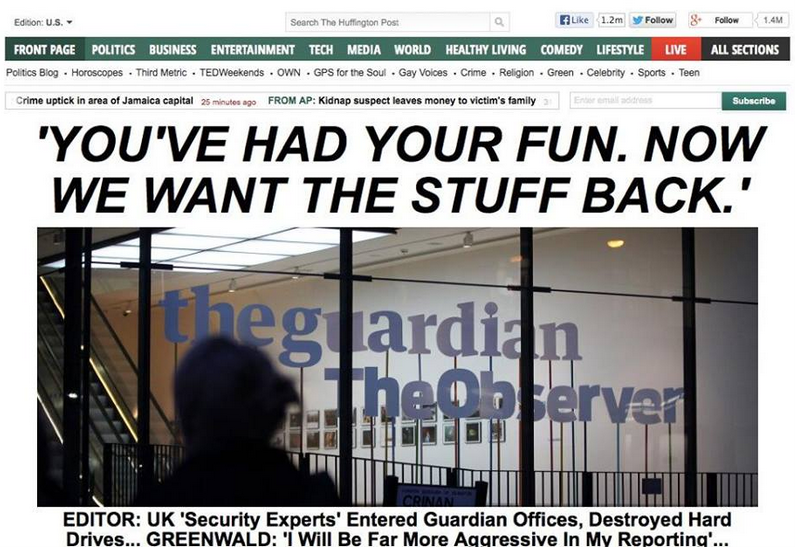 Alan Rusbridger, editor of The Guardian, wrote on Monday about an unsettling encounter with "security experts" from the U.K.'s GCHQ intelligence agency.

According to Rusbridger, "a very senior government official" contacted him about two months ago demanding the surrender or destruction of all materials in the publication's possession relating to the surveillance operations uncovered by Edward Snowden.

About a month later, Rusbridger recalls receiving a phone call "from the centre of government" in which he was told, "You've had your fun. Now we want the stuff back." He goes on to explain,

There followed further meetings with shadowy Whitehall figures. The demand was the same: hand the Snowden material back or destroy it. I explained that we could not research and report on this subject if we complied with this request. The man from Whitehall looked mystified. "You've had your debate. There's no need to write any more."

During one meeting, Rusbridger explained to an official that if the British government were to take legal steps in order to roadblock the paper's reporting, the work could simply be done outside of the country. That's when things took a disturbing turn:

The man was unmoved. And so one of the more bizarre moments in the Guardian's long history occurred – with two GCHQ security experts overseeing the destruction of hard drives in the Guardian's basement just to make sure there was nothing in the mangled bits of metal which could possibly be of any interest to passing Chinese agents. "We can call off the black helicopters," joked one as we swept up the remains of a MacBook Pro.