Bill Maher takes on some religious Republicans and conservatives religious justification for gutting social justice programs; and the mean-spirited nature of some Christians.

Mr. Maher mocked the Christian message of “I believe in charity, just not for people who need it” and concluded that “there’s always a good moral Christian to tell everyone they meet to fuck off and die.” Bill Maher ended his show Friday night with a blistering takedown of religious people who would love to do things like take care of the starving and needy if it weren’t always for some personal conflict getting in the way. Maher said these Christians should “just admit you’re selfish” and come to terms with the fact that their actions do not “mirror the spirit of Jesus.” Maher ran the gamut from Republicans pushing for more food stamp cuts to a Christian family that left a homophobic note instead of a tip for their gay waiter. Maher said they repeatedly emphasized the line “not share” to show “they’ve really absorbed the message of Jesus.” Source.

From Wikipedia:"The Pale Blue Dot is a photograph of planet Earth taken in 1990 by the Voyager 1 space probe from a record distance of about 6 billion kilometers (3.7 billion miles) from Earth, as part of the solar system Family Portrait series of images. In the photograph, Earth is shown as a tiny dot (0.12 pixel in size) against the vastness of space. The Voyager 1 spacecraft, which had completed its primary mission and was leaving the Solar System, was commanded by NASA to turn its camera around and to take a photograph of Earth across a great expanse of space, at the request of Carl Sagan." 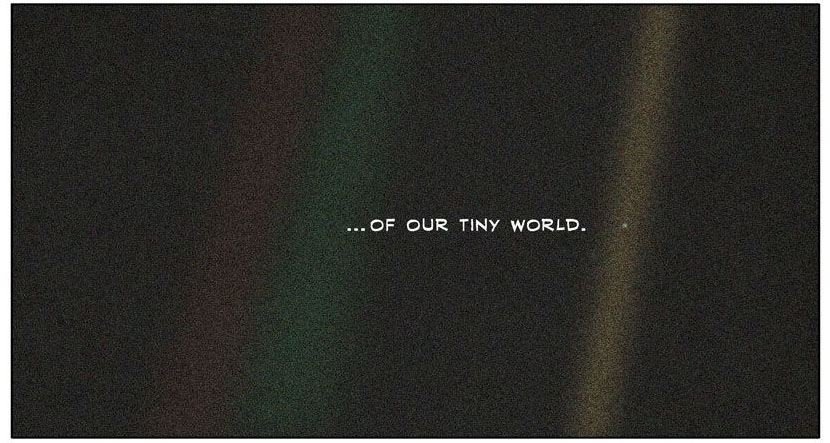 And here is the original video for Pale Blue Dot